Breaking News
Home / Technology / When a Unicorn Start-Up Stumbles, Its Employees Get Hurt

When a Unicorn Start-Up Stumbles, Its Employees Get Hurt

On Sept. 4, employees of Good Technology, a mobile security start-up in Sunnyvale, Calif., awoke to discover that their company was being sold to BlackBerry, the mobile device and software maker.

Some workers immediately began trying to figure out what it meant for Good to abandon its long-anticipated plan to go public â a move that would have potentially turned their shares in the start-up into gold. They didnât get firm answers that day, but the prospects did not look great.

Around 9 a.m., hundreds of employees filed into a conference room or started up videoconference software to watch Goodâs chief executive, Christy Wyatt, discuss the sale. Ms. Wyatt introduced BlackBerryâs chief, John S. Chen, who winkingly apologized for how his deal makers had driven Goodâs final sale price down to $ 425 million, less than half of the companyâs $ 1.1 billion private valuation.

âTheyâre very polite when theyâre beating you over the head,â Ms. Wyatt joked in response.

Just how punishing that price was became clear in late September. In an investor document about the sale that was distributed to shareholders, employees discovered their Good stock was valued at 44 cents a share, down from $ 4.32 a year earlier. In contrast, preferred stock owned by Goodâs venture capitalists was worth almost seven times as much, more than $ 3 a share. The paperwork also showed that Goodâs board had turned down an $ 825 million cash offer just six months earlier, in March.

Two Outcomes of One Deal

When Good Technology was sold to BlackBerry, not all of its shareholders benefited. The start-up’s employees, who own common stock, found their shares were valued far less than that of Good’s investors, who owned preferred shares. 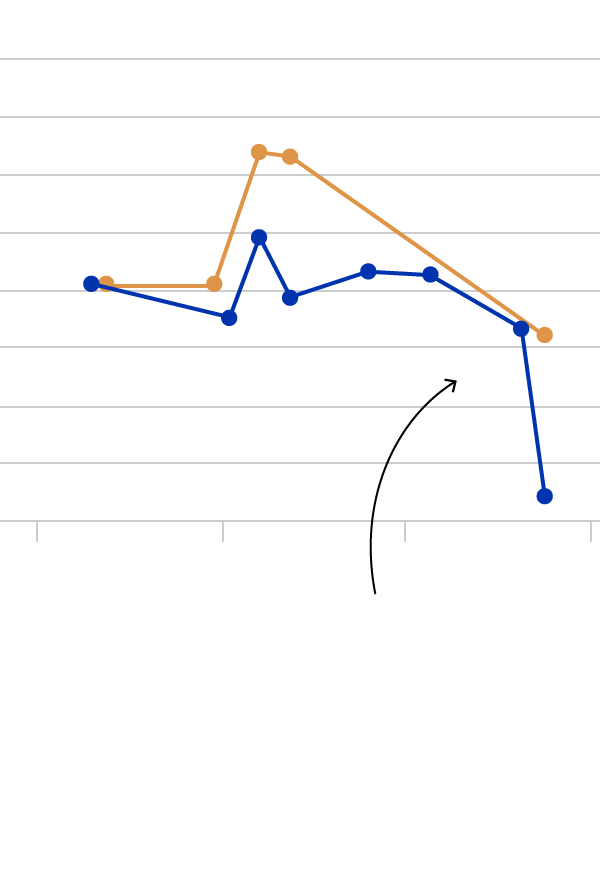 In April, Good’s board worries about cash flow, but its chief executive, Christy Wyatt, remained optimistic. By July, the company is running out of money and it is sold to BlackBerry in September.

For some employees, it meant that their shares were practically worthless. Even worse, they had paid taxes on the stock based on the higher value.

A few nights after the investor document went around, a glass conference room wall at Goodâs headquarters was broken, according to an incident report. At a subsequent company meeting, Ms. Wyatt told employees that counselors were available to talk to people who needed to vent.

âMany employees may not recover what theyâve lost,â said Matthew Parks, Goodâs director of cloud products, who has worked at the company since 2006. His Good shares are now worth a fraction of the six-figure tax bill that he paid for the stock allotted to him before the company was sold.

What Goodâs employees experienced is an example of who loses out when a company backed by venture capital goes south. While plenty of people â including founders, top executives and investors â are involved in the rise of a start-up, those hit the hardest during a companyâs fall are the rank-and-file employees.

Investors and executives generally get protections in a start-up that employees do not. Many investors have preferred stock, a class of shares that can come with a guaranteed payout. Executives frequently get special bonuses so they will not leave during deal talks.

In Goodâs case, the six investors on the board had preferred shares worth a combined $ 125 million. After the sale to BlackBerry, Ms. Wyatt, who has since left the company, took home $ 4 million, as well as a $ 1.9 million severance payment, according to investor documents.

In contrast, start-up employees generally own common stock, whose payout comes only after those who hold preferred shares get their money. In Goodâs case, the boardâs preferred stock was worth almost the same as all 227 million common shares outstanding.

Missing out on the upside of the sale was bad enough, but that wasnât the half of it. Some Good employees actually lost money when BlackBerry bought the company. Good was a âunicorn,â that is, a private company with a valuation of more than $ 1 billion. The high valuation increased the paper value of employee shares â and thus the income tax bills levied on their stock when they received the stock grants, or when they bought and sold shares. To pay those taxes, some employees emptied savings accounts and borrowed money.

Some of Goodâs common shareholders have sued most of the board for a breach of fiduciary duty, asserting that directors looked only after the interests of preferred shareholders.

âItâs not unusual for employees to be wiped out while venture capitalists make money,â said Dennis J. White, a partner in Boston at the law firm Verrill Dana, who has studied deals like Goodâs.

With the number of unicorn companies estimated at more than 140 today, the situation of Goodâs employees may befall other Silicon Valley workers as more start-ups begin to show signs of wobbling. Many unicorns have raised hundreds of millions â if not billions â of dollars. Most of those dollars must first be repaid to investors and other preferred shareholders before employees see a dime.

The odds that the unicorns will all reap riches if they are sold or go public are slim. Over the past five years, at least 22 companies backed by venture capital sold for the same amount as or less than what they had raised from investors, according to a data company, Mattermark. This means investors did not reap many returns â but there was even less left over for employees. Last year, the flash sale company Ideeli was sold to Groupon for $ 43 million after raising $ 107 million from investors. Fisker Automotive, the maker of hybrid electric vehicles, sold for $ 149 million after raising more than $ 1 billion.

Good Technology in its current form came into being in 2009. That was when the mobile software start-up Visto bought Motorolaâs mobile messaging and security business, called Good Technology. The merged company was rebranded Good and eventually shifted its focus to selling mobile-security software to big companies and governments.

Ms. Wyatt, a former Motorola executive who joined Good in 2013, planned to expand by selling more software to existing customers and to midsize companies. She hired more sales employees and acquired three companies.

In early 2014, Good was valued at more than $ 1 billion by investors including Draper Fisher Jurvetson and Oak Investment Partners, according to the research firm VC Experts. In total, the company raised about $ 300 million in equity and debt after Visto bought Good, according to VC Experts.

Good, like most start-ups, used stock options and equity grants to woo employees. The options allowed employees to purchase stock at low prices, even if the stock had a much higher value. Top sales employees were awarded with annual bonuses of 20,000 shares of common stock. When Good purchased start-ups, those employees got stock as well.

The company, which had about 800 employees, began working on an initial public offering in 2013. It filed to go public in May 2014.

For a while, the dream of employee riches appeared intact. In March, Good executives filmed a video presentation for an investor roadshow for an I.P.O. The company, whose revenue grew 32 percent to $ 212 million in 2014, projected 17 percent revenue growth in 2015. Executives expected Goodâs cash to last through the year, according to the companyâs prospectus.

The board and Ms. Wyatt appeared so confident that Good would be valued at around $ 1 billion when it went public that they rejected an $ 825 million acquisition offer from CA Technologies in March. CA declined to comment.

At the same time, Ms. Wyattâs growth plan wasnât working. Good missed its quarterly forecast for billings, a proxy for new business. Starting in April, the board discussed the âcontinued strong pressuresâ on the balance sheet, and management continually lowered financial forecasts, according to investor documents.

Good began discussing options with potential buyers and investors. It got a $ 650 million written offer from Thoma Bravo, a private equity firm, but did not proceed. Thoma Bravo declined to comment. Good also elicited interest from BlackBerry at an unspecified price, according to investor documents.

Employees were told little about the struggles. At a May company meeting, Ms. Wyatt said the company missed financial projections and addressed an email from a competitor that said Good would soon run out of cash, using the risk disclosures in I.P.O. registration documents that addressed Goodâs spending as proof. In a video of the meeting, she is seen telling employees not to worry. She compared the risk section to âcommercials for some new pharmaceutical product and itâs like 15 seconds about the product and then thereâs like 45 seconds of the 15 different ways it can kill you.â

At an all-hands company meeting in June, Ms. Wyatt again said Good was spending responsibly. Thanks to the cash from a recent $ 26 million legal settlement, she added, the company had âa ton of options,â including an I.P.O., according to a video of the gathering.

âWe were under the impression that Good was doing well, that there was nothing wrong with cash flow and that we had a lot of options,â said Igor Makarenko, Goodâs chief information security officer, who has been an employee since 1997.

Companies that buy employee shares offered some Good workers about $ 3 a share for their stock in the first half of the year. But based on their belief in the companyâs robust health, the employees refused. Others bought Good common stock in August, when it was valued at $ 3.34 a share, according to individual employee tax documents reviewed by The New York Times.Employees had little idea that an outside appraisal firm had valued Good at $ 434 million and the common stock at about 88 cents a share as of June 30, according to investor documents and legal filings.

The Internal Revenue Service levied taxes on some employees when their Good stock was still considered a valuable asset and worth multiples of what they actually received. One personâs tax bill came to more than $ 80,000, while another paid more than $ 150,000, according to interviews with current and former employees, who asked not to be named because the finances are private.

By late July, the board knew that Good would run out of cash in 30 to 60 days, according to investor documents. Good raced to close a deal with BlackBerry, from which it was forced to borrow $ 40 million during the negotiations.

After announcing the deal with BlackBerry in September, some employees said they were angry that Ms. Wyatt did not stay around. She went on a preplanned trip to China, where she gave advice on staying innovative at a World Economic Forum gathering, and to London for business. She subsequently left Good.

Back in the United States, Goodâs common shareholders were pushing back. In October, Brian Bogosian, a former Good C.E.O. and a significant shareholder, along with two institutions that own common shares, said the board was not looking after the interests of common stockholders and sued in Delaware Chancery Court. They are seeking unspecified damages and fees.

Randall J. Baron, the lawyer representing Mr. Bogosian and the institutions, said that âmanagers and controlling shareholders may not put their interests ahead of the minority owners of the company.â

In a legal response, Goodâs board wrote that the lawsuit was âa case of Monday-morning quarterbacking by former Good insiders with axes to grind and nothing to lose.â

Last month, 110 separate common stockholders exercised their shareholder right to contest the payout amount, according to Mr. Baron. Together, the stockholders own about 32 million of the 75 million common shares that are eligible for that action.

Mr. Makarenko and Mr. Parks, who remain Good employees, said they still believed in the company, but their views on management and venture investors have changed. They are among those contesting the payout.

âWe listened to these executives and, in the end, incurred huge tax bills because we trusted them,â Mr. Parks said. âEmployees essentially ended up paying to work for the company.â

Tech Tip: Build Your Own Computer

The New Workplace Is Agile, and Nonstop. Can You Keep Up?